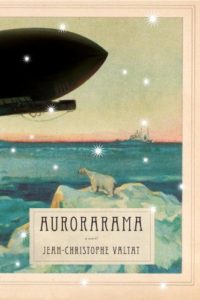 I found Aurorarama by Jean-Christophe Valtat to be a very interesting read.  The time period is hard to pin down.  I got the feeling it was set somewhere around early 20th century.  It is classified as Steampunk genre, and yes you did get that feeling while reading the novel.  Nor can I pin down if they would be in Canada or Alaska, though they do mention traveling by foot to Greenland. However it does contain strife between immigrants and Eskimos.

As I read this there were moments where I turned to my wife with the most puzzled look and my face.   There are various passages that just seem to give you that “what the heck just happened” feeling.  At no point did I feel I wanted to put the story down, I’d read another chapter or three and then, “Oh, that’s what that was!”  There really is no lag in the story, the flow continues fairly steady from start to finish.  It was a very interesting combination of politics, science, culture clash, intrigue, magic, religion, and paranormal.

The reader is placed in a position to witness a budding industrial city, clashing with the culture and customs of the Eskimo. At the same time presented with the political strife of a stagnating governing body beset by future minded feminists.  Throw in a mysterious woman’s body from the frozen wastes, the ghost of a dead witch, the mysterious appearance of a dark  airship silently hovering over the city, and the random appearance of the Mythological Kiggertarpok.

By the end of the story, Valtat does tie everything up, and gives you a rather fulfilling ending.  I would recommend this book to anyone who wants a good puzzler to entertain themselves with.